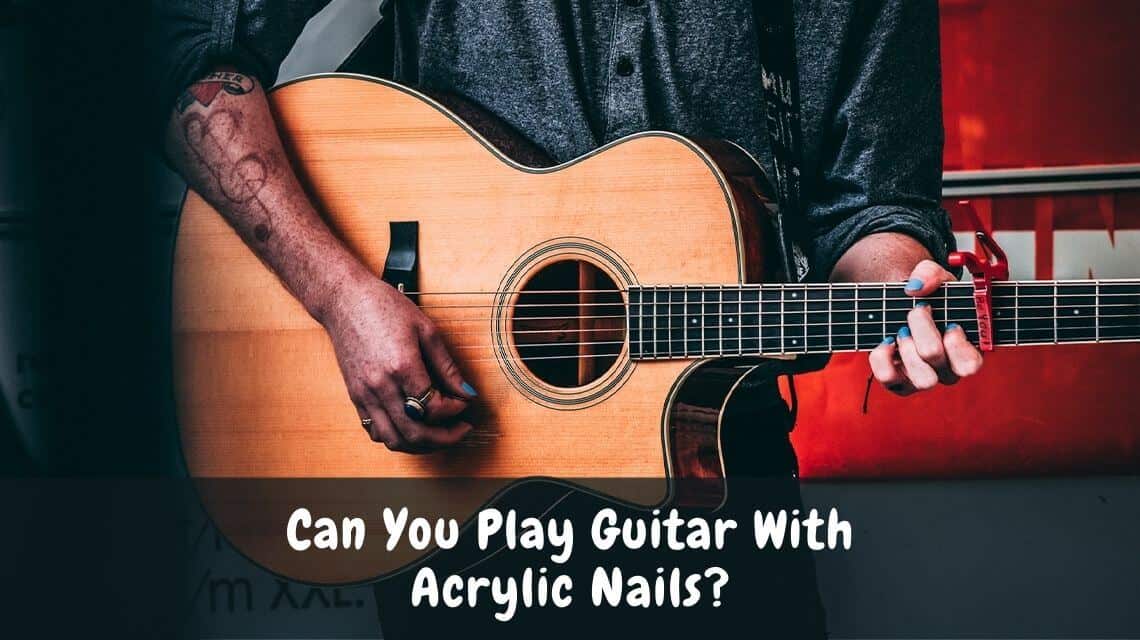 Guitar players have used nails to pluck the strings for a long time now — going all the way back to the days of Francisco Tarrega and beyond. Nails allow the player to produce more volume and a clearer tone in many cases.

Playing with the flesh of the fingertips produces a softer, subtler sound, more akin to a whisper. Also, the player often has the tendency to snap the strings outward, rather than press and follow through properly. Nails help to mitigate this problem, but not entirely. Good technique is still required, but nails make learning techniques more accessible.

In this article, we will explore the pros and cons of playing guitar with acrylic nails, and offer some tips on how to make it work if you decide to go for it.

Table of Contents show
1 Can You Play Guitar With Acrylic Nails?
2 Advantages
2.1 You’ll Be Able to Play with More Volume
2.2 Your Nails Are Less Likely to Break
2.3 Your Tone Will Be Clearer and More Articulate
3 Disadvantages
3.1 You’ll Have to Get Used to a Different Feel
3.2 You Have to Take Care of Them
3.3 They Don’t Sound as Good as Natural Nails
3.4 Once They’re On, They’re On
4 How to Put Acrylic Nails On
5 Final Thoughts

Can You Play Guitar With Acrylic Nails?

The short answer is yes, you can most certainly play guitar with acrylic nails. There’s not even a “but” in there.

Every guitarist might treat them a little bit differently though. For classical guitarists, acrylic nails are often the last resort when the natural nail breaks for whatever reason — be it accidental, or poor nutrition.

Steel-string fingerstyle players, however, often prefer acrylic nails. Most people’s natural nails simply can’t take the beating that steel strings give them —from plucking, to tapping, to strumming — but acrylic nails are strong enough to take it, so some players opt for it.

Personally, I’ve never needed acrylic nails when playing on steel strings, but then again, your mileage may vary.

So, if you’re looking to get into steel-string fingerstyle guitar, or are a classical guitarist whose nails have seen better days, acrylics may be the way to go.

But there are some things you should know before taking the plunge. Let’s take a look at some of the pros and cons of playing with acrylic nails.

You’ll Be Able to Play with More Volume

This is easily the most attractive reason for most guitarists to switch to acrylic nails. The hard surface that the nail provides allows you to actually press through the strings as opposed to the soft flesh of your fingertips.

This amplifies the sound of the string better and gives you a louder and clearer tone. It’s like having picks on each of your fingers, without the weird feeling that actual finger picks give some players, and you’re actually able to shape them in conjunction with the curvature of your fingertip — which further improves your tone and technique.

Your Nails Are Less Likely to Break

This one goes without saying — acrylic nails are much stronger than natural nails, and thus are much less likely to break while you are playing. This is a huge advantage for those players who like to mix in strumming with their plucking, or just have a heavy hand at playing guitar.

If you’re a clumsy person, this is good news for you too, since acrylic nails aren’t likely to break even if you accidentally slam your hand into something, unzip your backpack with your picking hand, shred cheese with your right hand, and the list of potential nail crises goes on. Acrylic nails are tough.

Your Tone Will Be Clearer and More Articulate

I mentioned this already, but let’s talk tone in a little more detail because an improvement in tone will likely only occur if you’re playing a steel-string guitar.

As a classical guitarist, your nails need to be shaped, sanded, and buffed so that the entire edge of your nail is smooth (like glass). This (along with proper shaping) is what gives you that crystal clear, unmistakably pure tone from a nylon string.

There are plenty of steel-string players out there whose focus is less on achieving a similar tone, and more on other things. That’s where things like finger picks come into play. Some are made from plastic, and others from metal, but they all slide onto the fingertip, giving the player’s tone a little more attack when plucking.

Acrylic nails give you the best of both worlds when playing steel-string guitar. You get the added attack and volume, along with the ability to shape the nail in order to dial in your tone —a luxury that finger picks simply can’t offer.

You’ll Have to Get Used to a Different Feel

If you’ve been playing guitar for any length of time with your natural nails, with your fingertips, or with finger picks, it’s going to feel a little weird switching to acrylics. It will take some time to get used to the new sensation of playing.

For those switching from natural nails, it might feel unnatural at first, but you’ll quickly adjust.

For those going from finger picks or flesh to acrylic nails, it’ll probably just feel weird altogether. Going from no nails to long nails feels weird for everyone, and once they’re on, they’re on (more on that in a minute).

You Have to Take Care of Them

All good things require a little bit of maintenance. Depending on how often and for how long you play, a set of acrylic nails may need regular reshaping and buffing to keep them sounding their best.

As your nails grow, you’ll also need to keep filing them, and filling in behind them so that they retain a consistent shape on your fingertip. Not everyone does this, but the more they grow out, the less surface area they have to cling to, which means they are more likely to fall or break off.

They Don’t Sound as Good as Natural Nails

This point applies to classical or nylon-string guitarists. Acrylic nails don’t buff out to be as smooth as natural nails. You simply can’t achieve that “glassy” surface. This is because the acrylic material itself is porous, so no matter how much you buff and polish it, it’ll always sound more scratchy than your natural nails.

That’s why they’re only a last resort, behind natural and gel nails. On steel strings, you don’t hear the nuances of nail smoothness as much, so it’s not really a disadvantage.

Once you put a seat of acrylic nails on properly (so that you can play), they’re not coming off for a few days at the very least.

Granted, if you absolutely HAVE to get them off, you can do it the painful way, but that’s not advisable — you don’t want to risk ripping natural nails off along with them!

So if you’re thinking about trying out acrylics, make sure you’re prepared to commit to at least a week or two, depending on how quickly your nails grow.

How to Put Acrylic Nails On

Before we get into this, I highly recommend going to a salon to have them put on professionally.

If you’re a man, yeah, maybe there’s a weird stigma about men going to a nail salon. But trust me, it’s so much easier than you think.You won’t get glue everywhere, you won’t have to size, clip, and shape them — it’s just so much more convenient.

Now, putting acrylic nails on isn’t that difficult, but it can get messy if you don’t know what you’re doing. You’re going to need some nails, acrylic powder, brushes, clippers, nail glue, a nail buffer, and a nail file.

So can you play guitar with acrylic nails?

Yes, and a lot of players do.

It’s really not as difficult as it seems, but there are a few things you need to take into consideration before making the switch from natural nails or from finger picks.

I hope this guide has helped you learn all about fake acrylic nails for guitar.

If you have any thoughts or questions, you’re welcome to post them in the comments below!

1 thought on “Can You Play Guitar With Acrylic Nails? (Expert’s Advice)”