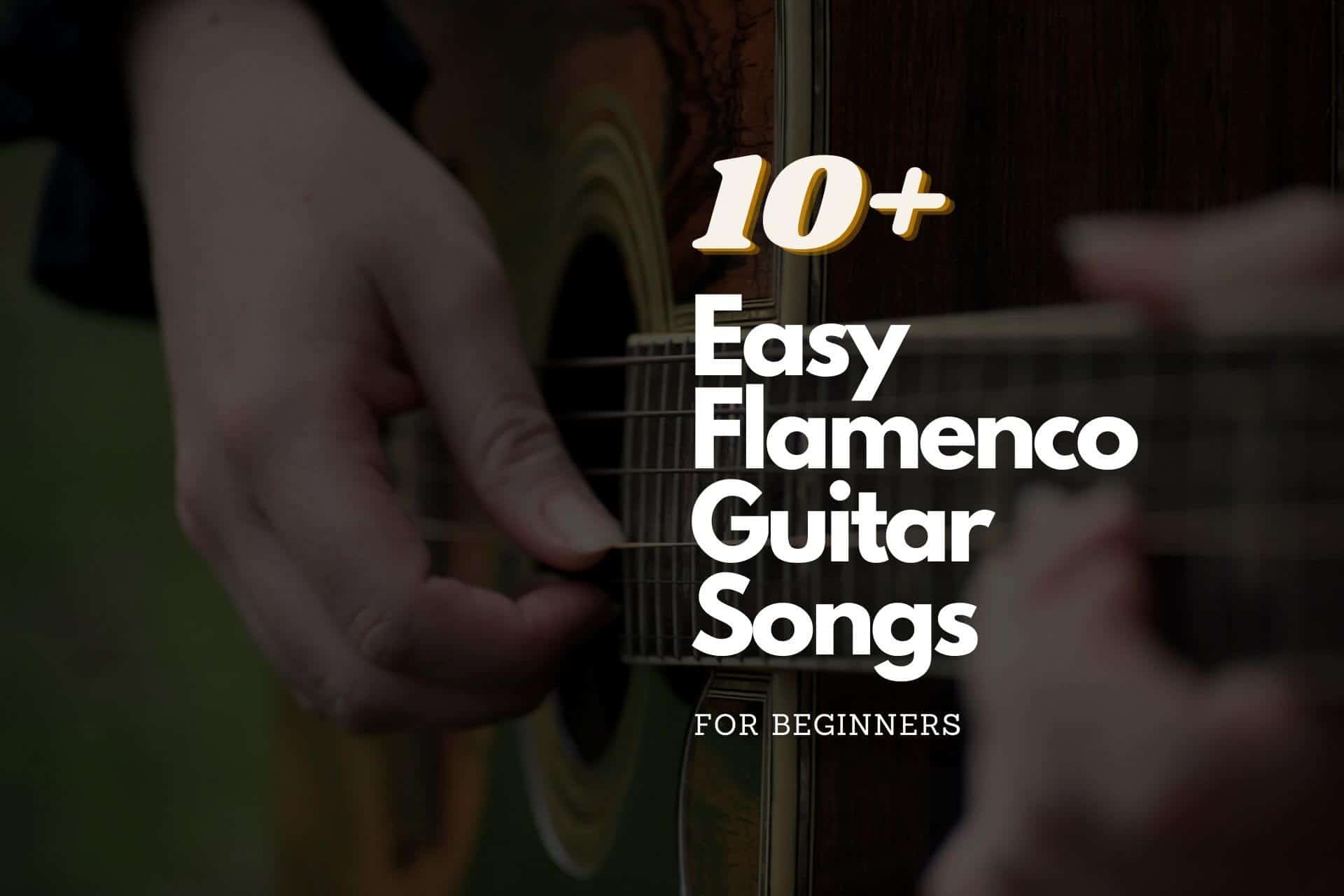 So, you just got your first nylon string guitar and are excited to start with Flamenco guitar?

Here’s a list of 10+ Easy Flamenco Guitar Songs to get you started.

Flamenco is not the same as Spanish Guitar. A lot of techniques of the latter apply to Flamenco guitar, but not vice-versa. Purists don’t traditionally refer to Flamenco pieces as ‘songs’, but rather a collection of Flamenco ‘styles’ (palos).

We’re talking about a huge variety of styles such as – Alegría, Tango, Sevillana, Fandango, Bulería and more, each with its own characteristics.

Flamenco guitarists usually start with an easy style like Tango or Soleares. If you’re getting into learning Flamenco guitar then the best way to go about is to have a teacher to speed up the process a lot and really learn the genre methodically from top to bottom.

And yes, you need a nylon string guitar, not a steel string one!

There is no right answer for where you should start with Flamenco.

If you’re a beginner and want to learn it by yourself, I highly recommend not directly jumping on to pieces but starting with a deep understanding of compas (Flamenco rhythm & progressions) and then moving on with the broad range of palos (styles).

Of course, listening to Flamenco music is extremely important and I believe these easy Flamenco guitar songs would be a good resource for any beginner.

I have added a few classical pieces as well on this list, which I think can help develop some of the fundamental Flamenco techniques.

Malagueña is one of the most popular Spanish guitar pieces of all time. It has been developed into a Flamenco style and has seen hundreds of interpretations in Flamenco, Classical and other genres.

Some players like to go extremely physical when playing Flamenco, and if you’ve heard their rendition of Malagueña, it might come across as a daunting piece. It’s definitely not “easy”, but don’t worry!

A few versions are easier than others, including this one by Sabicas. It does involve a lot of techniques from Picado, Tremolo picking to Rasgueados. Malagueña doesn’t have any fixed rhythm pattern to it, and is played in the Phrygian mode.

Pharaon is one of the most popular Flamenco songs of all time. It’s also one of the first Flamenco pieces I learnt.

Well, wait till you hear the blazing fast Picado runs. It can be quite a challenge getting those down. And when you do, it’s a very gratifying experience.

In short, learn this song if you want to develop your Picado. It’s also the quintessential piece to have in your Flamenco repertoire.

The album includes one of the most notable Farrucas of all time – Punta y Tacon. Besides that, it’s full of beautiful and highly technical pieces such as Joya de la Alhambra (Granadina), Campiña Andaluza (Alegrias), Aires de Triana (Bulerias), and Bronce Gitano (Soleares).

If you’re a beginner, I’d suggesting starting with the Soleares, Fandango, and Taranta, but feel free to learn the pieces you like.

But remember to have your Picado and Rasgueado on point before attempting any Sabicas piece!

Soleares (or Soleá) is one of the oldest and most basic Flamenco palos. Most pieces based upon this style are all easy Flamenco guitar songs any beginner can try.

The fundamental compas of the Soleá consists of 12 beats, with accents on the 3rd, 6th, 8th, 10th, and 12th beat. This is the same beat structure used in a lot of other popular palos including Alegrías, Bulerías por Soleá, only the tempo is much slower in this case.

Paco Peña is among the foremost Spanish flamenco players of all time, well-known for his exquisite play style. that’s innovative yet authentic. His album “Toques Flamencos” is a collection of 10 fantastic solos every Flamenco guitarist should learn during there musical journey.

It’s definitely an advanced album, but there are a few easy-ish (but very popular) pieces that are worth attempting for any beginner. So things like En las Cuevas (Farruca) and El Nuevo Día (Colombiana) are not very tough technically.

While on the other hand, you’ll find some of the most challenging and amazing pieces such as A la Feria (Sevillanas) with crazy rasgueados, and La Romería (Alegrías) with reasonably fast tremolo and picado.

Fiebre is a relatively easy Rumba by young Flamenco guitarist Ben Woods. In fact, this is probably one of the very few ‘easy Flamenco guitar songs’ you’ll find from him.

It’s actually played like a fingerstyle song for the major part besides the rumba. Basically the only techniques you’ll need to learn are arpeggios, picado, legato and of course, rumba strumming patterns.

It’s a great one to learn if you’re bored of the usual rumbas every beginner is usually taught!

Most of Paco de Lucia’s compositions aren’t easy for any beginner, but here is a rare one that could be learned by even beginner to intermediate skill players.

I wouldn’t say it’s easy, you will need that perfect picado and tremolo to really play this perfectly.

Kai Narezo is a Flamenco guitarist and teacher who has tons of useful tutorials on his YouTube channel. His tango falseta is particularly easy for any beginner to pick up and master.

They say the best way to get fast at playing the guitar is to play it slowly. Well, this Rumba by Juan Serrano is the perfect way to get started with this palo.

It’s at a very manageable tempo for beginners, you’ll usually hear Rumbas MUCH faster than this. It involves playing fills and picado lines in between the rumba strumming patterns, so you’ll develop your timing and picking skills as well.

Here’s a Spanish classic – Bésame Mucho, arranged beautifully for Flamenco guitar by Ben Woods. This one is not among his most difficult arrangements, but is certainly not a piece of cake.

Make sure to practice your Picado and Rasgueados well before attempting this song.

Romance Anónimo (or Spanish Romance) is a very popular Classical composition, but I think it would be a great addition to this list of easy flamenco guitar songs.

It’s fairly easy for beginners especially for the fretting hand – notice the simple chords in the beginning (some involve just one or two fingers). It teaches you a very important technique in Classical guitar – Arpeggios! This technique is equally widespread in Flamenco as well.

While it would be easy to pick up, it’s a tricky one to master! But its always a good thing to have a recognizable song up your sleeve.

Flamenco guitar is NOT easy, especially if you have only played an electric or a steel-string guitar before (or none at all).

The most important part is the rhythm and learning the right-hand techniques. You will have to drop your pick and learn to use all the fingers of your picking-hand, which takes a lot of effort and patience.

So, those were some easy Flamenco guitar songs (or now you know, styles) to help you get started.

Flamenco is huge, and distinctly one of the hardest styles to play on guitar. But once you start picking the styles and techniques, it’s extremely fun and gratifying to play.

If you have a favorite Flamenco song or style in mind that would be a great addition to this list, feel free to drop a comment. Thanks for reading!