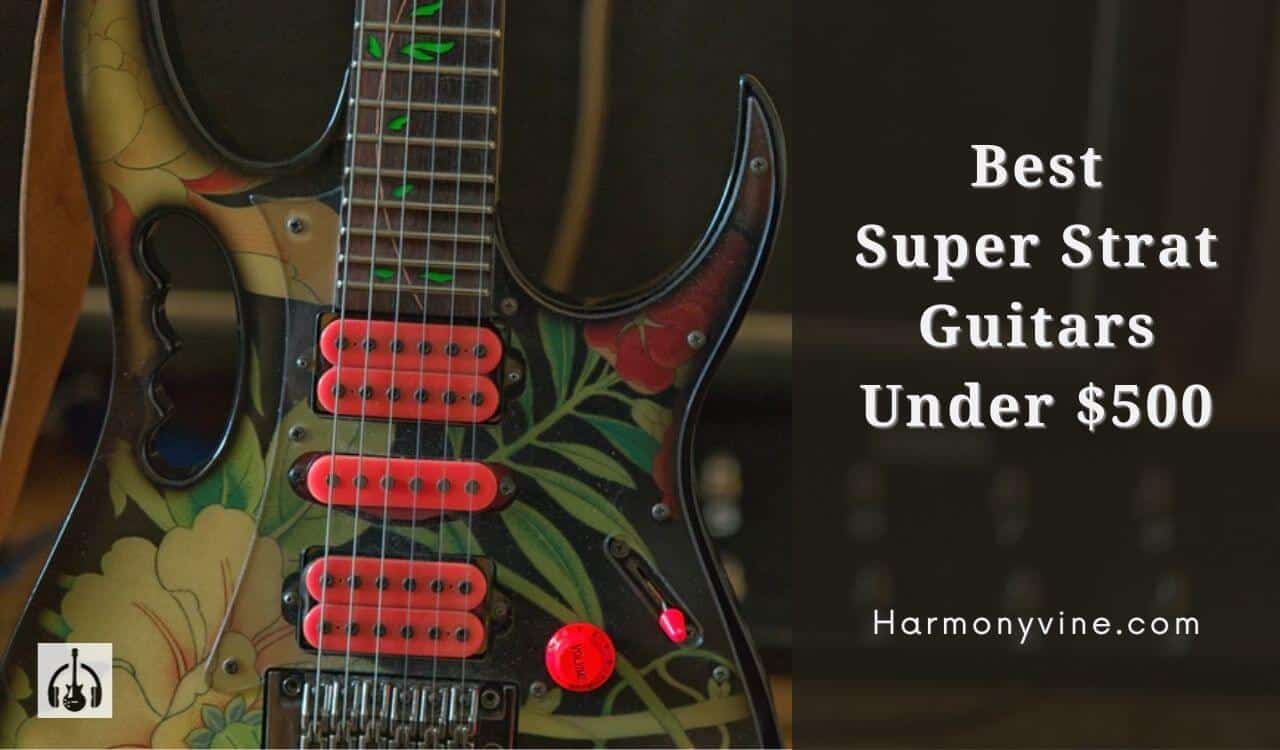 The 80s was an exciting time to be a guitarist. Everyone was trying to outdo each other with better riffs, faster licks, and soaring solos. This was hair metal at its best. It was akin to gunslingers in the Wild West trying to show everyone who was the better shot.

In the midst of it all was the superstrat. The chosen musical weapon of 80s metal guitarists.

Although the genre isn’t as popular anymore, the superstrat remains a favorite amongst guitarists.

So, if you’re looking for one and you’re on a tight budget, this is the list for you. We’ve rounded up 5 of the best super strat guitars under $500 in the market today.

What in the World is a Super Strat?

A superstrat is technically any Stratocaster-shaped guitar with upgraded features. Think of it as a Stratocaster on steroids.

Superstrats came into existence out of a need for guitarists to have more out of their Fender Stratocasters. They exist to cater to a different type of musical style that Fender’s original guitar can’t. More bite in their sound, more flexibility, more features, more, just more.

A superstrat typically has these features:

Seriously, all you really need are the top three: humbuckers, a fast neck, and a tremolo bar and you have a superstrat. What seals the deal is the presence of all the other upgrades to the classic Stratocaster form that makes it deserving of the word “super” in its name.

Guitarists like Ritchie Blackmore (Deep Purple/Rainbow) and Dave Murray (Iron Maiden) were one of the first guys to have their Stratocasters modified to fit their heavier sound.

But it wasn’t until Eddie Van Halen showed up with his Frankenstrat that the gates were blown wide apart. It didn’t take long for guitar makers like Grover Jackson to produce superstrats for the buying market.

Steve Vai, Vito Bratta, Nuno Bettencourt, and a whole slew of other guitarists became brand ambassadors for superstrats. Their near god-like status made every aspiring guitarist want to emulate their playing style and own a superstrat.

Superstrats have endured a lot of challenges throughout the years but it has proven that they’re here to stay.

“Designed by a guitar God for future guitar Gods.”

The Ibanez JEMJR is a beautiful guitar. It has all of the features you would expect to find in a superstrat. Which is not surprising since this is based on Steve Vai’s Jem series.

One would argue that it was really Steve Vai who made the perfect prototype for what a superstrat is supposed to look like, sound like, and play like through the Jem series.

Ibanez was able to make this possible by incorporating more cost-efficient parts as opposed to what you’d find on the flagship Jem models.

So instead of a Floyd Rose double-locking tremolo, you’ll find in its place an Ibanez licensed replacement. Instead of DiMarzio pickups, you’ll find Quantum pickups. You get the picture now?

Don’t get me wrong though, despite its significantly low price tag, this is a guitar worth owning, keeping, and playing.

The Ibanez JEMRJ is easily the best super strat under $500. Hardcore Steve Vai fans will definitely love this guitar. And not necessarily just for playing. This guitar is a work of art by itself. What you basically have is a more affordable Jem in your hands that you can play or put on display.

This is a more affordable and conservative guitar from Ibanez. But that doesn’t mean it’s any less a superstrat as the Jem.

This is still a great guitar that anyone would fully appreciate playing with.

So, what can you expect from the Ibanez RG450DX?

First, there’s the awesome Wizard III neck. This is easily one of the fastest necks available in the Ibanez catalog. This alone makes it stand heads and shoulders above the competition in that price range.

Next, you have the licensed Floyd Rose double-locking tremolo which can take a lot of abuse.

Lastly, the RG450DX comes fully equipped with twin Quantum humbuckers and a single-coil pickup. The 5-way pickup selector and master tone knob allow you to explore a world of tonal possibilities.

This is a guitar you can equally play heavy metal onstage with or sitting down as you play jazz in an intimate setting.

All in all, this is a solid guitar that you can take along and play with. A worthy runner-up to the JEMJR if I might say so myself.

“The gateway guitar to a lifelong addiction to superstrats.”

I have to admit, I have a pretty biased view when it comes to the Yamaha Pacifica 112V. Having started out on a Pacifica in my youth, this instantly brings memories flooding in. It’s basically still the same guitar that I learned to play fast licks with.

What makes the Yamaha Pacifica 112V a good guitar to start out with?

You get a respectable sound coming from the Yamaha Alnico humbucker and single-coil pickups. You can also go from clean to gritty without the need to purchase aftermarket pickups.

And then there’s the sleek C-shaped maple neck that is perfect for playing chords. It’s also great for blazing through with a hundred or so well-placed notes on the rosewood fretboard.

Although I can now afford more expensive guitars, I will always have a Yamaha Pacifica in my collection. It’s the best guitar to teach my students how to play the instrument. And somehow, I always find new and interesting things to play with when I pick it up.

Kramer ruled the guitar world in the 80s. And then everything changed in the 90s. Kramer essentially had to close up shop because its out-of-the-world guitar designs had no place during the grunge era.

Now, thanks to Gibson, Kramer is making a resurgence and a new generation of guitarists are discovering just how great this company’s guitars are.

In effect, it becomes a guitar worthy of the title “the best of both worlds.” You get something old without sacrificing its playability.

Vintage guitars definitely cost a lot of money. The Kramer Pacer Classic gives you the opportunity to own a classic instrument without burning a hole in your pocket. This is basically the same guitar great guitarists of the 80s cut their teeth on.

“The embodiment of metal in superstrat form”

Despite the 90s era’s avoidance of guitars that were part of the hair metal movement, Jackson managed to keep going. They did this by catering to a select market: heavy metal musicians.

This loyalty to the genre rewarded the company with players swearing by the brand. As the grunge era slowly died down, Jackson came back full force with bands like Korn, Lamb of God, and Slipknot.

It also helped that metal guitar heroes like Randy Rhoads, Dave Mustaine, and Scott Ian fiercely stood behind the brand since the 80s.

Throughout Jackson’s history, the Dinky has been an ever-present body style thanks to its superstrat genes. It is currently the most recognizable Jackson guitar shape thanks to over 15 variants carrying the Dinky name.

The Dinky gets its name from its smaller body as opposed to a standard Stratocaster. What it lacks in size though, it more than makes up for in tonal capabilities, hardware, and playability.

In my opinion, the Jackson Dinky Arch Top JS32 is the best-looking guitar in this selection. It has a well-executed look that’s perfect for any musical setting.

Hands down, the Ibanez JEMJR wins. It sounds great, looks great, and plays great. It has everything you would need from a superstrat and then some.

This guitar is priced just a hair under $500 which makes it even more amazing if you put into consideration everything that comes with it.

Having humbuckers, a double-locking tremolo bar, and a fast neck will almost instantly bring any guitar over the $500 price point. Jackson managed to put all these features in and still stay within the budget.

Including the artistic features Steve Vai is known for (tree of life, lion claw, and monkey grip) is definitely a big bonus for those who find the flagship models out of reach. These are the features that truly define the JEMJR from other Ibanez models.

In conclusion, the Ibanez JEMJR is the best superstrat under $500 that you can buy in the market today.

On a side note: if the JEMJR’s body styling and the over-the-top tree of life inlay are too much “Steve Vai” for you, you could always go for the Ibanez RG450DX which works just as well, if not better, than the JEMJR.

Another worthy guitar to choose over the JEMJR and RG450DX is the Jackson JS32 Dinky. I was tempted to say get the Yamaha Pacifica but it just can’t hold up against the JEMJR in terms of sound and performance.

That’s it for now. Keep on rocking!

Recommended: Don’t need a super strat? Looking for regular guitars instead? Check out this ultimate roundup of the Best Electric Guitars for the Money!

Yes. Superstrats are highly versatile instruments that you can use for any musical situation. They’re equipped with a 5-way switch that allows you to easily change pickup settings from humbuckers to single coils or a combination of both.

This makes it equally applicable to heavy metal music as it is to blues, hard rock, and even pop music.

What is the Difference Between a Strat and a Superstrat?

A superstrat is essentially a hot-rodded version of a Fender Stratocaster. Where Stratocasters use single-coil pickups, superstrats have a combination of humbuckers and single coils. This opens up the tonal possibilities the instrument can deliver.

Superstrats also have a more angular appearance, have faster necks, deeper scoops, and a tremolo bar that you can perform divebombs with.

This is a highly debated topic as most people would say it was Eddie Van Halen who brought this movement about. In truth, Ritchie Blackmore, Uli Jon Roth, and Dave Murray had already modified their Fender Stratocasters earlier than EVH.

What many people don’t actually know is that Michael Hampton of Parliament-Funkadelic also had a superstrat before EVH had one.

Is Superstrat Good for Metal?

Don’t be fooled though, superstrats are also good for playing blues, hard rock, and pop music on certain occasions.