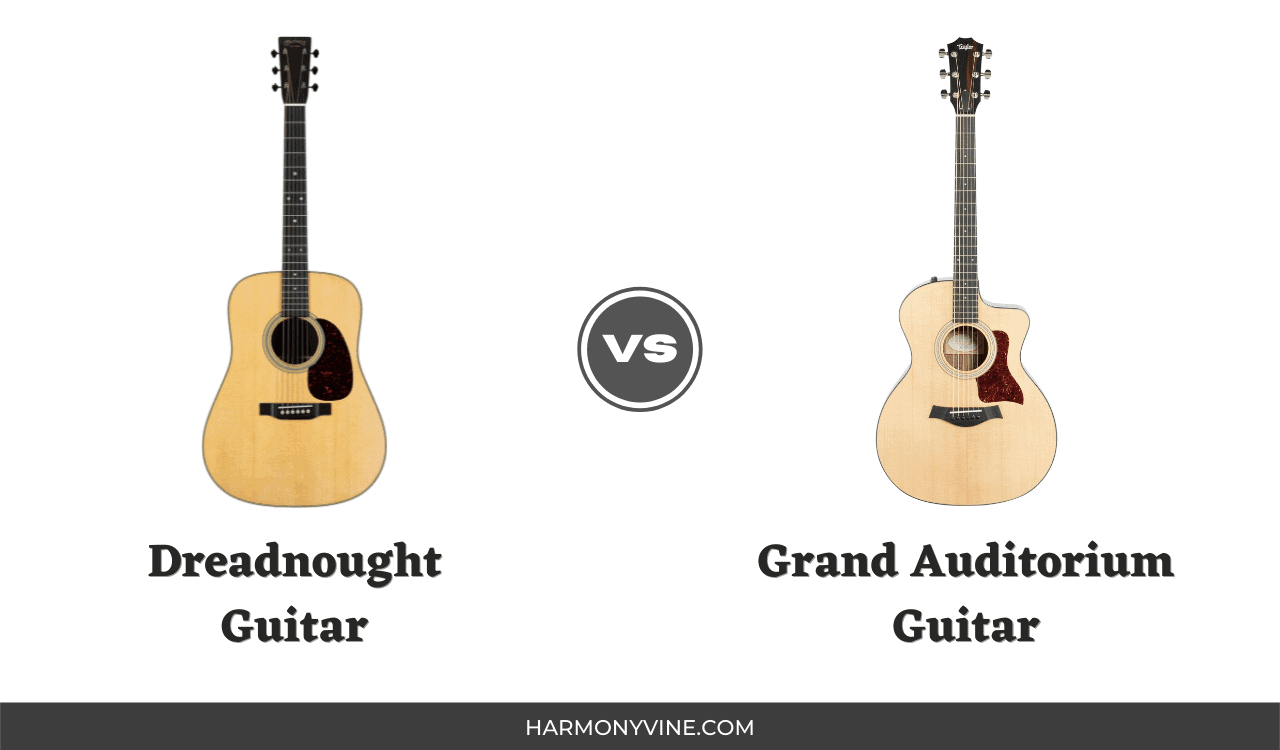 Dreadnought vs Grand Auditorium Guitars – Is it like comparing apples to oranges?

Or is there a clear distinction in the applications of these acoustic guitar body shapes?

Well, keep reading this article and you’ll learn exactly what the differences are, and if one guitar shape is really meant for one style of playing.

What is a Dreadnought Guitar?

As we all know it, Dreadnought is the most popular acoustic guitar shape of all.

Although the style was originally introduced in 1916 by Martin Guitars, the shape we widely see nowadays was developed a bit later around 1931.

The dread shape is one of the larger body shapes for acoustic guitar, so you can naturally expect it to be on the louder and deeper side tonally.

Some of the peculiar characteristics of dreadnoughts are:

Being such a workhorse and all-rounder, dreads are available in almost any price range and most acoustic guitar brands make these.

Some of the most iconic dreadnoughts include the Martin D-18, Martin D-45, and Gibson Hummingbird.

What is a Grand Auditorium Guitar?

Grand Auditorium is a new style that rose to popularity during the ’90s.

And the inspiration came from the size difference between the bigger Dreadnought and smaller shapes like the Parlor and Grand Concert.

As a result, you get a modern-looking acoustic guitar that offers the best of both worlds – a balanced tonal spectrum with clear highs and almost as loud as a full-sized dreadnought.

This seemingly small modification in the design really makes a difference in the playability and applications of these instruments.

Many big brands have their own version of the Grand Auditoriums, but the most notable manufacturers are Taylor (popular models include the 214ce and 814ce) and Martin.

Here are the differences in body dimensions of these two shapes (approximate values):

Some key points we can take away from the table above are:

The Dreadnought is clearly bigger but not by a huge margin. Playability-wise, both can be set up to play as comfortably as you want.

Of course, if you have a small body or hands, you might find the Grand Auditorium better suited for you.

With a high volume ceiling and much longer sustain, these guitars are ideal when you’re playing in a band and want to be heard better.

The higher sustain also allows for some nice overtones, as the already vibrating body can interact better with the strummed notes.

Dreads can also bear higher gauge strings (medium or even heavy), and this makes them the “big strummer.”

A peculiar scoop in the mid-range means vocalists will have a space to be heard in a mix.

Grand Auditorium guitars tend to have a better overall balance, with no frequency range overpowering others.

They reproduce higher frequencies better than dreads. For the same reason, these are usually preferred for fingerpicking.

But don’t think that these lack bass!

Well-built Grand Auditoriums will have a good amount of bass and volume. Just that it won’t be as boomy or overpowering as dreads.

Dreadnoughts are the ultimate all-rounders. They can be used in almost any genre – rock, jazz, folk, blues, country, bluegrass, you name it!

They are great for strumming, flatpicking, and even fingerpicking. But remember that a dread will not be as loud if you have a softer playing style.

Grand Auditoriums on the other hand, are suited everywhere except where you need heavy strumming.

These are ideal for singers, writers, and any casual player or performer.

But in the end, both of these acoustic body styles are interchangeable and ideal for pretty much any kind of music.

You can’t go wrong with a dreadnought, well, unless you need a smaller guitar or like the sound & feel of another shape.

Go with the dread if you:

Apart from that, a big factor that goes in favor of dreads is availability.

You’ll find great dreadnoughts at pretty much any budget range – from a couple of hundred bucks to upwards of thousands of dollars.

A Grand Auditorium guitar is ideal for you if you:

Another interesting thing I’ve realized is that many folks find dreadnoughts less comfortable while seated (not all of them, though).

If you’re one of them, then a grand auditorium might feel better due to the narrower waist.

Is Grand Auditorium Bigger than a Dreadnought?

Generally speaking, these two would be roughly the same size (taking Taylor acoustics for reference here) when it comes to overall dimensions.

But the overall volume is lesser in Grand Auditorium guitars due to narrower lower bout and slightly less depth. So you can say these is slightly smaller than a Dreadnought guitar.

Specifically, Grand Auditorium guitars have a tighter waist giving them a rounder shape. Dreadnoughts, on the other hand, have broader waists giving them a more squarish appearance.

Grand Auditorium vs Dreadnought: Which is Better for Fingerstyle?

The slightly smaller footprint and a rounder shape enhances the clarity and responsiveness of mid and high frequencies. Whereas dreads simply lack the sparkle and response in the higher frequency ranges.

At the same time, there is no reason why you shouldn’t be using a dreadnought for fingerstyle though. I use one myself. But your fingers will have to work harder to get the same results.

Will a Grand Auditorium fit in a Dreadnought case?

In most cases, a Grand Auditorium guitar WILL fit in a full-sized Dreadnought case.
The lower bout on the former is just a hair narrower than the latter, while the waist is significantly smaller. So it would leave some space around the waist and upper bout area.

If you find that the guitar is moving around a lot, you can fill the space with cloth or any other accessory.

On the other hand, a dreadnought would most likely NOT fit in a grand auditorium case, due to obvious reasons.

3 thoughts on “Dreadnought vs Grand Auditorium: Which Acoustic Guitar Do You Need?”