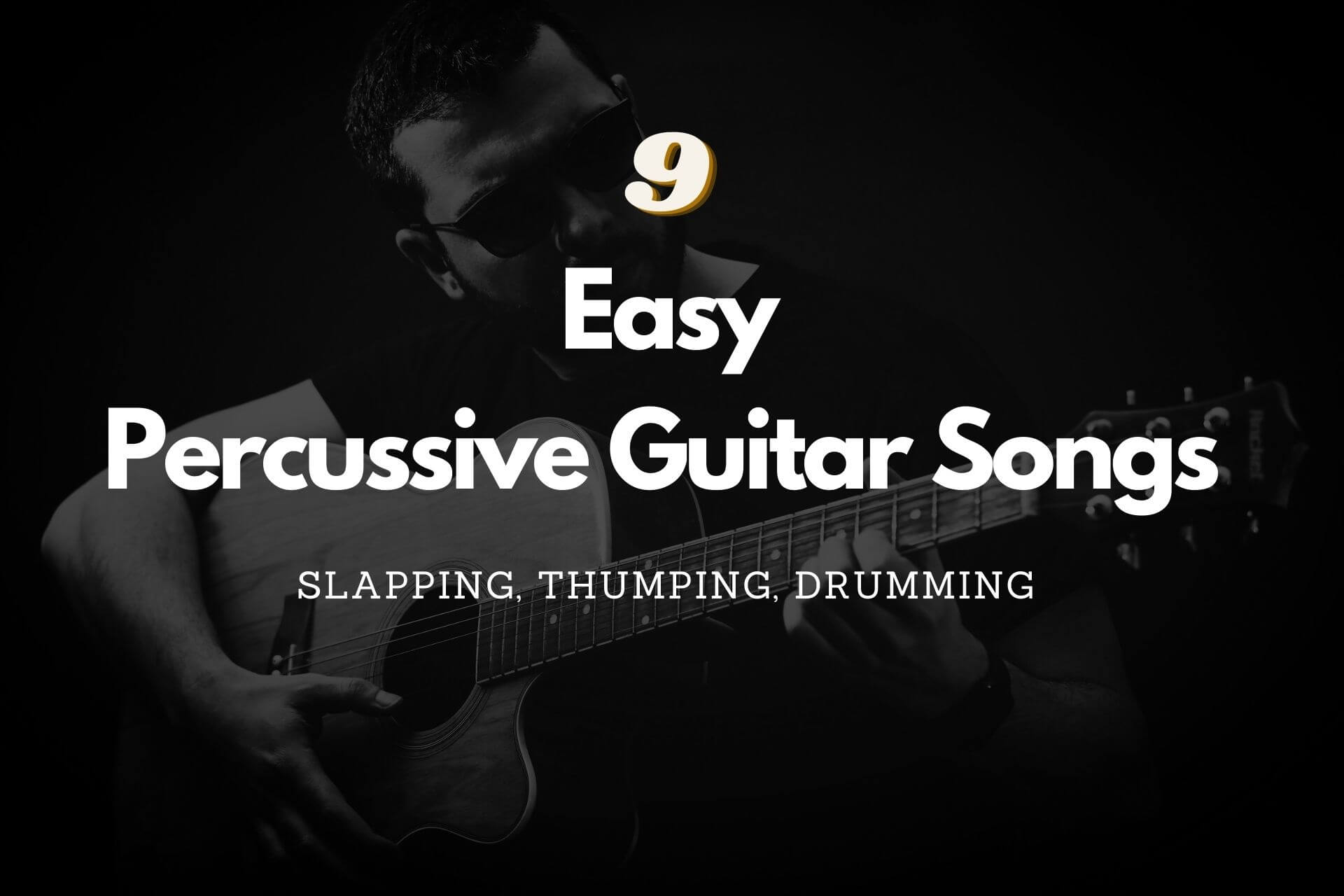 It looks cool, no doubt! Playing awesome drum grooves on the guitar on top of chords and melodic lines – Sounding like 3 different instruments when there’s only one guitar and one YOU!

Where do you start?

Of course, no one starts by playing “Neon” or “Overload.” You have to begin with some easy percussive guitar songs and gradually upskill from there.

The key to becoming a great percussive player is to play more and more. The more you play, the more techniques become natural and you’ll pick up new ones much faster. And remember, always start slow!

I’ve curated this list so that you get exposure to a diverse set of percussive techniques and not just the good ol’ slap-pop stuff.

These easy percussion guitar songs will teach you proper guitar drum grooves, thumping, ghost notes, and everything you can imagine.

Let’s start with a simple, but probably the most popular song on this list.

More Than Words by Extreme is the perfect entry into fingerstyle slapping technique. This is the ideal song for newbies looking to get into freestyle fingerpicking.

The song uses easy beginner guitar chords meaning you can focus on your picking hand skills more. In fact, memorizing the whole song is harder than actually playing it.

You’ll be playing the treble strings using your I, M, and A fingers while the thumb plays bass notes along with a slap every off beat. This song is ideal for anyone who has never played slapping with fingerstyle before.

Jack Johnson also uses a lot of percussive slap in his songs – both with and without a pick!

Once you’ve mastered the slap with your bare hands, you can move on to learning the muted slap with the plectrum. Sitting, Waiting, Wishing is a perfect song for that, but definitely check out some of Jack’s other songs as well.

The rest of the song is pretty easy chords and strumming patterns, so you won’t have any trouble practicing it. Once you’ve learned the song, you can learn other pieces like Better Together and Banana Pancakes (duh!).

John Mayer has a few similar songs where he uses his signature slap-strum technique – Who Says, Stop This Train, and The Heart of Life to name a few.

Mayer’s technique is very unique in that he catches a string with his index finger along when doing the slap. This creates a sense of continuity while still keeping a constant rhythm.

Stop This Train is not a very difficult song once you get this slap pattern down. But Mayer also sings on top of playing guitar, that’s a completely different story!

Well, it’s time we get some drums going!

Newton Faulkner has a lot of percussive pieces that any beginner can learn without much difficulty. But probably one of his most famous pieces is the cover of Teardrop by Massive Attack.

In his cover, Faulkner plays a repeating drum pattern by hitting the top of the guitar. Once you get that pattern down, you can easily embellish it by adding chords, plucked notes, and strums.

The hardest part is getting the timing right, because you’ll be performing a lot of syncopated strums and notes along with the rhythmic pattern.

I would highly recommend Tobias Rauscher for learning some diverse percussive techniques. His songs aren’t the hardest, and a lot of them are definitely achievable for most beginners.

For starters, I recommend Memories (and also Still Awake). The song starts with a short and sweet fingerpicking intro but quickly develops into a catchy verse with hammer-ons, artificial harmonics, and two-handed percussion.

You’ll be hitting the body of the guitar a lot. Memories will teach you a lot about performing different percussive riffs, all while fretting and hammering notes with your left hand.

Radio Hill by Thomas Leeb will take your artificial harmonics to the next level. Thomas has plenty of marvelous and highly-technical compositions, but this one is one of his easier percussive guitar songs.

The song is an ideal step-up from basic fingerpicking-slap songs to a little more exciting strumming patterns. Radio Hill will brush up on your percussive technique before you can move on to songs like Desert Pirate and Grooveyard.

Andy McKee is one of the finest acoustic guitarists and Drifting is his most popular song. If you always wanted to use your guitar’s body like a drum, try playing this one.

The song is in DADGAD tuning, which is an extremely popular tuning for fingerstyle acoustic guitar. You’ll have to learn some unusual percussion on the guitar, plus positioning the left hand above the guitar neck most of the time.

The great thing about Drifting is that you’ll learn to do percussion with both hands, which is crucial if you want to be a master percussion guitarist. Not only that, it’ll improve a lot of other techniques as well – two-handed tapping, slap harmonics, and unique strumming.

If you’ve heard Calum Graham’s songs you know his playing involves some nice percussive grooves, melodic harmonics, and a lot of tapping. While a lot of his pieces are not necessarily beginner-friendly, I find the title track of his 2013 album with Don Ross to be relatively easier than the rest.

The song 12:34 uses left-handed tapping on the bass strings and a lot of percussion around the soundhole and the fretboard. The key here is to really let the harmonics ring out and keep a nice rhythm that flows throughout the song.

Of course, Graham uses some nice delay and reverb effects for adding embellishment to the piece, but you don’t need those to learn the song.

EVDM is one of the most popular guitarists/cover artists on YouTube. He has plenty of easy percussion guitar songs covered on his channel, but I think his cover of Imagine Dragon’s Believer is quite impressive. In fact, Believer stands as his most viewed cover as of today. If you’re learning percussion on an acoustic guitar, this song should be definitely on your to–be–learn list.

If you’re not in the mood to play pop-rock songs, that’s alright. But surely practice the percussive drum-rolls and transitions that he plays in this song. These are some of the must-have riffs in your repertoire.