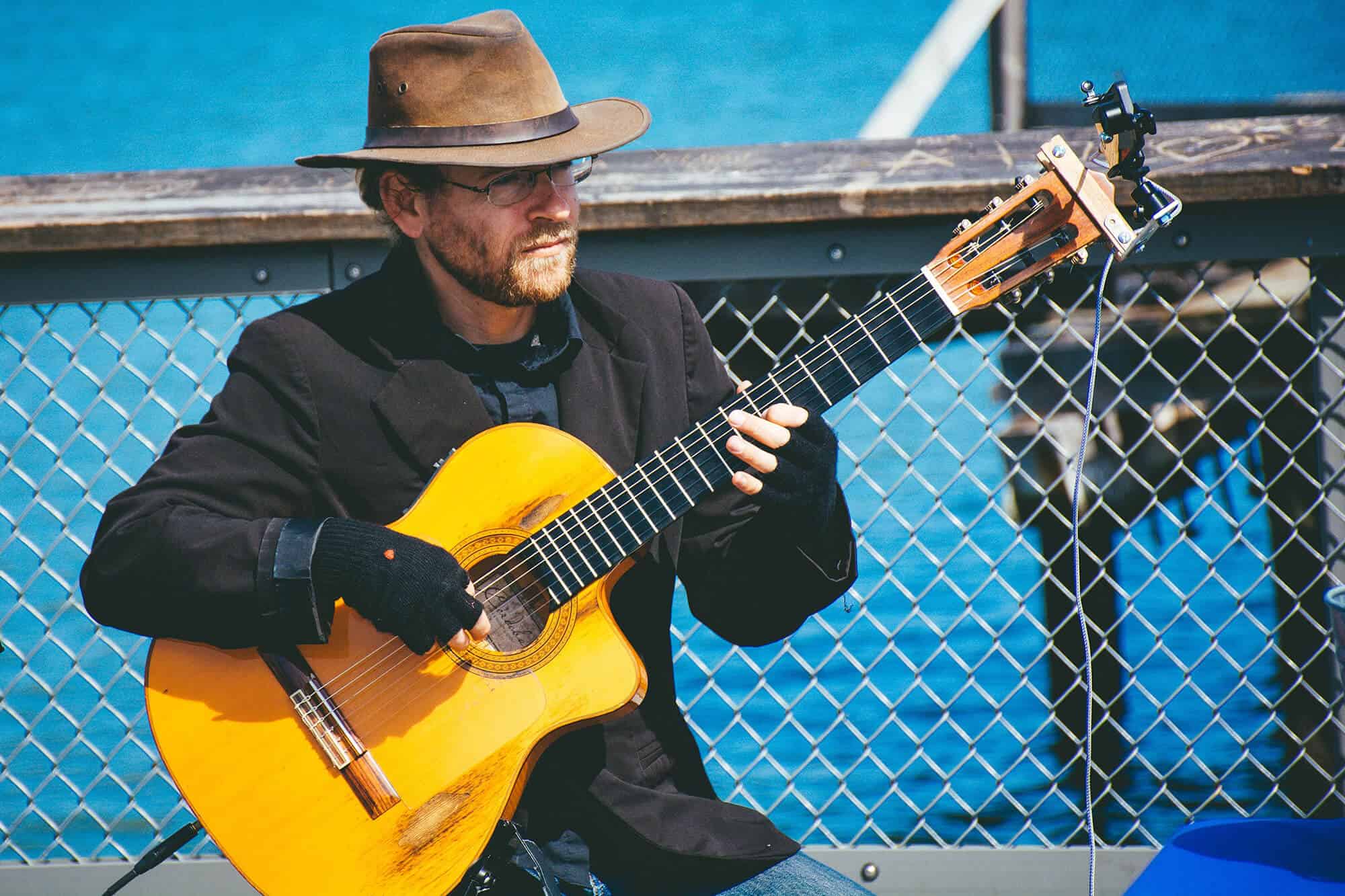 Flamenco is a specific style of guitar that’s slightly different from nylon string classical guitar. Flamenco guitars are characterized by a sharp and loud attack with a swift decay causing an aggressive and percussive tonality.

But what if you don’t have a nylon string with you? Can You Play Flamenco on a Steel String Guitar?

Of course you can play Flamenco on a steel string, but it won’t sound or feel the same. Just like an electric guitar solo won’t sound the same on an acoustic guitar. But there are more subtleties involved than choosing the right instrument.

We’ll discuss why you shouldn’t be practicing Flamenco on a steel string. Having six strings and the same tuning doesn’t mean it’s the same thing. If you have been using a pick to play the guitar all these years, you might have to relearn a lot of the techniques, but there’s more to that.

How Do You Play Flamenco Style Guitar?

Flamenco is a style of Spanish guitar played both as a dance accompaniment and solo performances. It’s traditionally played on a nylon string ‘classical’ style guitar using your fingernails and not a pick.

Flamenco shares much of its roots to classical guitar with some very overlapping techniques, but with the added zing of the Spanish culture and percussive art forms.

Guitarists that happen to play other styles tend to agree that Flamenco is one of the hardest styles to play on a guitar, while being incredibly rich in its tonality, sound and technique.

Flamenco involves your right hand giving the rhythm and performing various picking and percussive techniques, while the left hand does the usual fretting, legato and hammering.

Flamenco incorporates several techniques for the right hand that usually aren’t associated with contemporary classical guitar. Some of these include Picado, Rasgueado, Tremolo, Alzapua, Pulgar and Golpe among others.

If you’re coming from a classical guitar you will find it fast to pick up some of these techniques, however very difficult to master some of them.

What Makes a Flamenco Guitar Different From a Classical Guitar?

A Flamenco guitar is slightly different from a nylon-string classical guitar in terms of construction, materials and sound.

Flamenco guitars are usually made with cedar tops instead of spruce, and cypress or sycamore back and sides. Classical guitars need more sustain and hence incorporate rosewood or mahogany back and sides into their construction.

Flamenco guitars often have a ‘golpeador’ or tap-plate, which is just a sheet of clear plastic on the front (right where the pickguard is on some guitars) so you can do all the percussive techniques without damaging the fit and finish. Talking about percussive effects, Flamenco guitar is designed with a thinner profile and less internal bracing that gives it that bright percussive feel.

Flamenco guitars have very low action to enhance playability and technique at the cost of slight buzzing. Since this style incorporated a lot of percussion and heavy strumming patterns, these bodies are crafted to be loud and cut through the sound of the dance and music.

Can I Play Flamenco on a Steel String Acoustic Guitar?

It depends on what style and sound you are referring to as Flamenco. A steel string guitar won’t sound close to traditional Flamenco playing, which is always played on a nylon string guitar.

Acoustic Guitar sounds overly bright when played with Flamenco techniques. Furthermore, it has narrower string spacing than a nylon string guitar so it makes a lot of the fingerpicking and tremolo techniques much harder to perform.

Based on my experiences, you can definitely start picking up some techniques especially when you’re just starting out. In fact, I started fingerstyle on an acoustic guitar, but that was more on the folk and blues side.

I’m sure you will be able to play some easy Flamenco/Classical songs on acoustic. Furthermore, the groundwork you do will definitely help when transitioning onto a Flamenco guitar.

Steel strings are rough on nails, so you need to be careful to file your nails smoothly and give them a nice shape. Once you get to pick up the more fancy stuff like the Rasgueado strumming or Picado, it gets really tough to pull those off on a steel string, which hurts like crazy.

If you really wish to learn actual Flamenco technique, I would suggest you stick to a nylon string. This would also avoid having to relearn the hand positioning as it is a lot different for Flamenco vs Steel string guitar.

Can You Play Flamenco on a Classical Guitar?

A Flamenco guitar has nylon strings, which makes it a lot closer in respect to a classical guitar. Nylon sounds more human and more intimate as compared to the bright and brilliant tone on the steel strings.

In fact, obtaining a traditional Flamenco guitar is not that easy, and many artists simply use a nylon string classical guitar to play Flamenco. Additionally, you can get the tap-plate attached to perform the Golpe or other percussive techniques on a classical guitar.

An experienced Flamenco player can easily tell the difference between the two. Classical guitar won’t have the same aggressive and percussive attack of the Flamenco. On the other hand, classical players will frown upon the low string action and buzz of Flamenco guitars. If you are a beginner, however, starting on a classical guitar is perfectly fine.

1. Can You Put Steel Strings on a Spanish Guitar?

No! Putting steel strings on a Spanish/Classical guitar will permanently damage the guitar top and may eventually lead to snapping of the neck.

Steel strings may hurt a bit more if you’re a beginner and haven’t developed calluses yet. Nylon strings are softer and thicker and are easier to press against the fretboard.

3. Can you use a Pick on a Nylon String Guitar?

You can certainly use a pick on a nylon string guitar, but you won’t be able to play traditional classical pieces and you’ll get a sharper sound. Classical guitarists play primarily with fingers as it allows them to play multiple strings simultaneously combining chords, melodies and harmonies.

4. Can I Replace Steel Strings with Nylon?

Yes, you can but it won’t give you desirable results. Putting nylon strings on an acoustic guitar won’t damage the guitar, but you won’t get the same tone and volume as a classical guitar. It may also lead to weird buzzing and intonation problems.

If all you want to play is some basic arpeggios and maybe some fancy triplet strumming, you can do that on any guitar you like. But then you are not really playing Flamenco, which will be painful on a steel string.

If the only thing you have is a steel string acoustic guitar, it’s better to start on that rather than not starting at all. But keep in mind that you might have to relearn a lot of techniques when you switch to a classical or flamenco guitar.